People who order groceries for delivery may be using digital payments or a plastic card to pay for their food, but the person picking up the groceries may be making a separate payment at the point of pickup — and in the process, influencing the global shift toward contactless payments.

Even before the coronavirus pandemic Marqeta had been promoting contactless payments and mobile wallets as a means to quickly enable its gig economy clients to add contractors to their workforces. Marqeta, a card issuer and processor, had invested heavily over the years to create a “just-in-time” prepaid card capability that could enable instant contactless payments for a specific purchase; and battle fraud that occurs when a food or grocery delivery worker would shop for a customer and then fraudulently add extra items for their own benefit such as dinner.

The growth was enabled by the use of an “on-demand delivery prepaid card” that can be loaded into a mobile wallet, Peters explained. 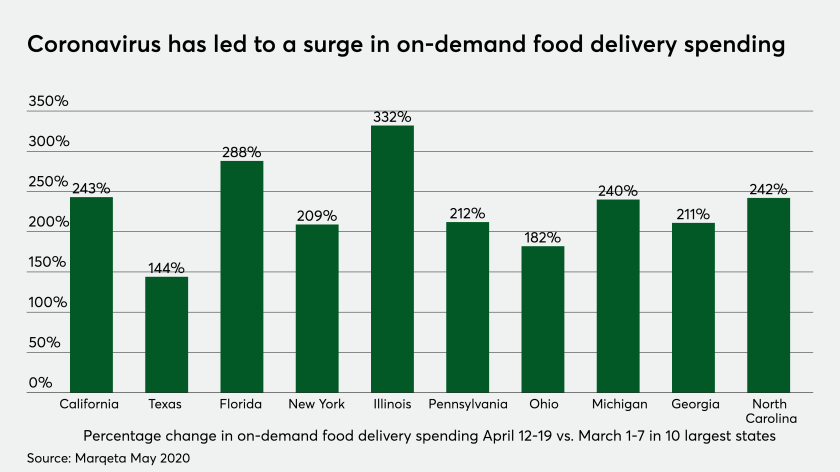 “The on-demand delivery card powers their gig workers with a just-in-time funding ability to make the purchases. It allows them to quickly add gig workers to their staffs, provide funds at time of payment, is safer and eliminates the ‘and dinner’ fraud that used to be an industrywide problem,” Peters said.

Once the shopper is ready to pay for the client’s groceries, a request for funds is made and the Marqeta platform loads the exact funds, including taxes and other fees, into the shopper’s prepaid account. These funds can be accessed by using a physical contactless card or a tokenized card that has been added to a mobile wallet.

On-demand money delivery eliminates the need for reconciliation as the funds are tied to a specific customer’s shopping list and the job the contractor is completing.

Having the ability to quickly add gig workers with contactless cards and digital versions for mobile wallets has been critical in enabling the rapid growth of gig economy workforces targeting food and grocery delivery. In April, DoorDash added grocery delivery from convenience stores while Uber added Uber Direct to help its ride-share contractors switch from ride hailing to grocery delivery. Last November, Target integrated the food delivery startup Shypt, which it acquired in 2017, into its mobile shopping app.

Having the ability to offer contactless cards and mobile wallets has also been an important recruitment tool, as these gig economy companies seek to hire contractors to shop. Contractors, just like the general public, are becoming increasingly reluctant to handle often-touched POS terminals that may be deemed dirty or infected.

“Habits are being changed and will be permanent for many cardholders. And if another pandemic wave hits when we enter flu season in the fall, then no-touch payments may become forever dominant at the checkout,” said David Shipper, senior research analyst in the retail banking and payments practice at Aite Group.

According to Marqeta, the growth in food delivery services in the U.S. has boomed since the coronavirus pandemic took hold in the U.S. The difference in food delivery spending for the week of April 13 compared to the first week of March was up by triple-digit percentages in all of the top 10 most populous states — California was up 243%, Texas up 144%, Florida up 288% and New York up 209%.

“Human behavior is incredibly hard to change, often requiring time and resources to make it happen. It’s rare to get something to force drastic change, yet that’s what we have with the pandemic,” Peters said. “Now combine that with contactless cards and mobile wallets … Contactless gives you control. It gets you out of the store faster.”

For the consumers who are brave enough to still go grocery shopping on their own, the contactless trend has had a powerful effect on merchants as well, causing many to shift toward acceptance.

Marqeta, which is a privately-held company, recently raised $150 million in funding, giving it a valuation of $4.3 billion. The round was managed by Financial Technology Partners LP. The valuation is more than double the $2 billion valuation Marqeta received when it closed its Series E fundraiser in 2019. Investors in Marqeta include Visa, Goldman Sachs, Lone Pine Capital and Granite Ventures.